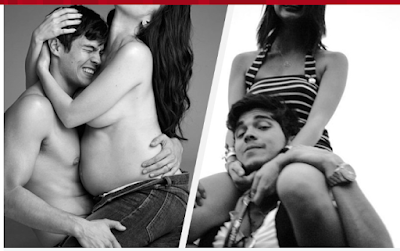 MANILA -- It's a popular template for those posting online on how they plan to approach 2020 -- comparing their pictures from the start of the decade to ones taken just before the end of it.

And Erwan Heussaff appeared to like the idea of looking back as he decided to use it to usher in the next chapter of his life as potential parents with wife, Kapamilya star Anne Curtis.Curtis first announced that she was expecting back in November, and she's expected to give birth sometime in March.

She is also looking forward to life as a mother, flaunting her growing baby bump with her husband. The set also sees them both topless, with only Curtis' arms hiding her chest.
Posted by Unknown at 6:03 PM