Black Nazarene back at Quiapo church

Unknown
6:12 AM
Black Nazarene back at Quiapo church 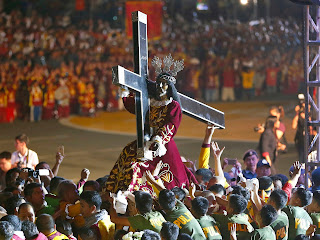 MANILA (UPDATE)  - The Black Nazarene procession ended just before 9 p.m. Thursday as the image was returned more than 16 hours since the annual Traslacion started amid tighter security and stricter regulations.

By police estimates, some 3.3 million people joined the procession, with more than 530,000 gathered at Plaza Miranda and Quiapo Church, the culmination of one of the country's biggest religious events. But before it could, the andas or carriage seemed carried away by the wave of people jostling to reach and touch the image- a feat considered by devotees as a bearer of miracles.

In a statement, Manila Mayor Isko Moreno called the event "record-breaking" as the Traslacion took a shorter time than usual. Black Nazarene processions in previous years had taken more than 20 hours.


New security measures police and the city government introduced had disappointed some devotees, but Moreno promised even more changes next year to speed up the procession.

Among measures enforced this year were the deployment of a police phalanx surrounding the andas and a shorter route.
Posted by Unknown at 6:12 AM